Gee Atherton took his third win at the Polygon Air DH at Crankworx this weekend. He is unbeaten in the Event's history, having secured double wins with Rachel in 2012 and 2013. Team-mate Marc Beaumont took 7th place (he previously scored a 6th and a 4th at this event).

Weather conditions in the run up to the race were as unpredictable as ever for les Deux Alpes. There were thunderstorms  and Friday’s practice was cancelled due to high winds as slick tracks caught out many riders.

In seeding, Gee laid down an awesome run to put 8 seconds into the rest of the field; Marc took it steady, seeding 18th.

On race day the wind was still high, resulting in many riders opting to go around the famous Giant Air DH jumps. The track had dried out to become bumpy, super-fast, and it remained very steep. This year a new high-speed section had been added, which the riders loved. 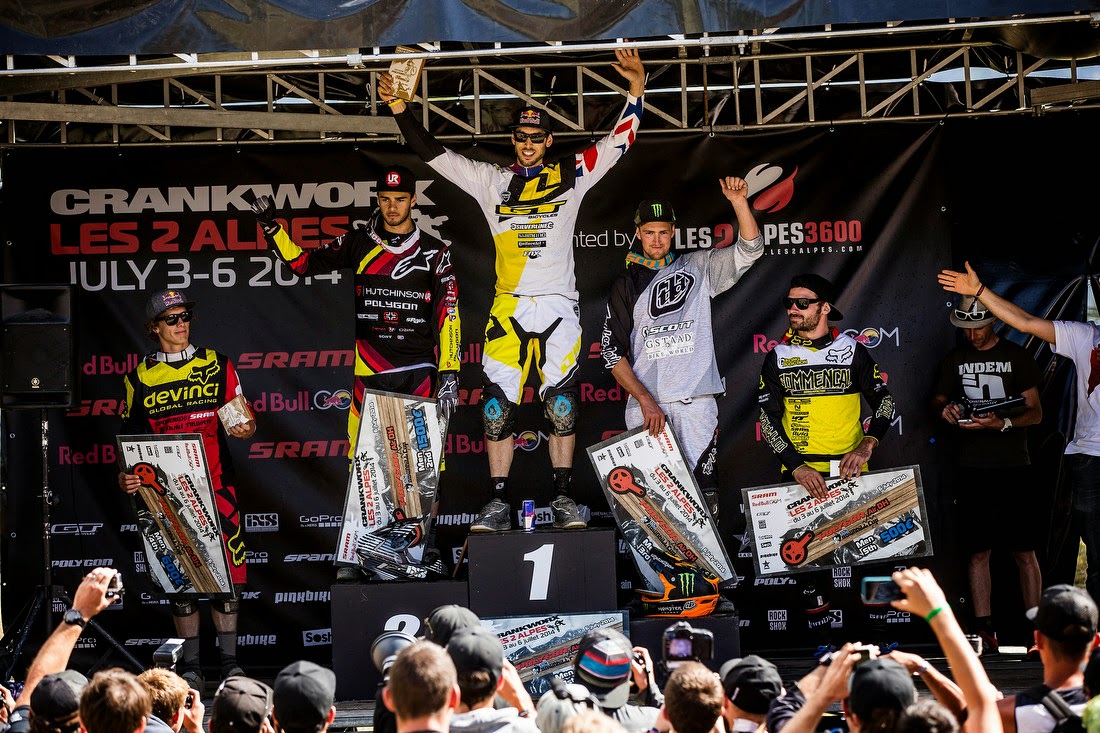 Marc’s mechanic, Mark Maurissen said: “That was a man’s track this weekend! GT’s BMX rider Mike Day is here – he said it was the steepest track he had ever ridden!”

Marc commented: “It would have been good to podium here, but Crankworx is always a great weekend. The track was fun and we’ve had a great time.”

GT Factory Racing’s junior rider, Taylor Vernon, also had a successful weekend, taking the win at Pearce Cycles, Bringewood with the fastest time of the day at 2:20.39.

Double win for Gee and Rachel at Llangollen, BDS Round 4

Kade wins four out of four rounds for Atherton Academy

A sunny weekend at Llangollen saw a double victory for Gee and Rachel Atherton for the second consecutive year, and Atherton Academy rider Kade Edwards secured his fourth victory out of four juvenile races. Taylor and Marc were disappointed with 11th and 15th places respectively.

Rain before practise day on Saturday had resulted in ‘absolute carnage’ in the woods. By the qualifying runs on Sunday the track had started to dry out but there were still some very slick areas that required huge nerve and concentration from the riders. 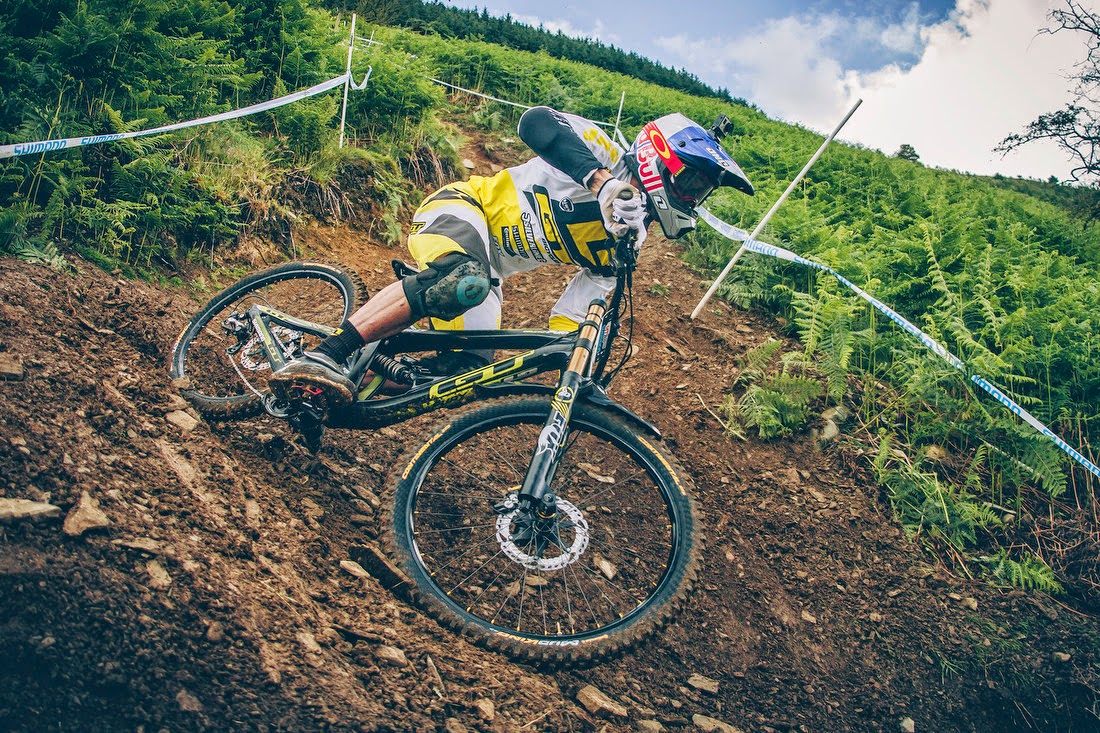 In the Women’s qualifying it was clear that the race was going to be between Rachel and Manon Carpenter. Rachel qualified first with a time of 2.34.9, Manon was second with 2.49.19, then there was a huge gap to Jess Greaves with a brave 5.53.46.

Gee qualified in third place with the fastest top split but Series Leader Marc couldn’t find his groove this weekend and qualified 11th.

In the Finals the Juveniles were up first. Kade had qualified in second, 7 seconds behind Luke Birkett after a two small crashes in the top section, but in the actual race he put all that behind him and was 7 seconds ahead of the field by split 1 and took the win with a 2.42.61 – 10.7 seconds clear of Adam Beatty. Birkett came in 3rd.

Kade commented: “I stayed cautious, let it flow, no stops. It’s quite dusty up top now with a few tacky sections, the bottom was nice and smooth and very flowy – I enjoyed it!”

The Women raced next, and with track conditions a little better, they all improved their times but positions held - Jess took third, Manon took second with 2.40.06 but Rachel came flying down the hill in 2.30.67, showing the form she has been struggling to recapture since South Africa and the illness that followed – a massive 9.39 seconds in the lead. 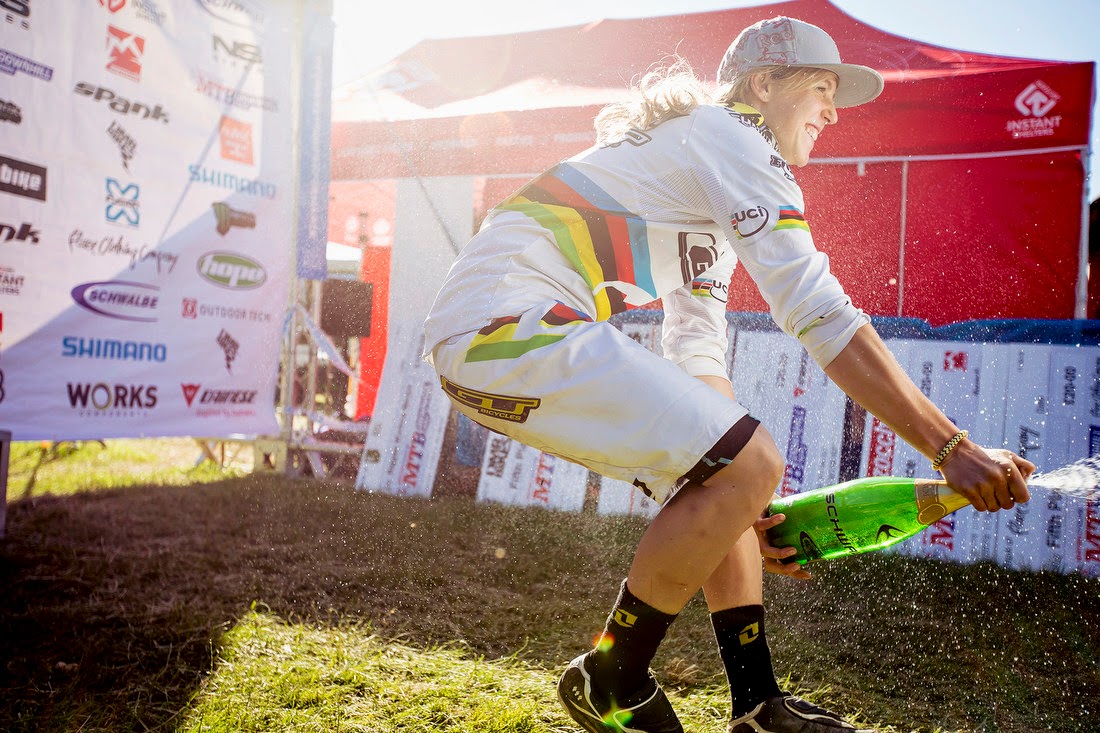 Rachel commented: “I prefer this track to a lot of the World Cup tracks. It’s so steep and technical but so much fun; I love riding for this crowd, Manon was pushing me hard – it feels great!.

In the Junior race Taylor Vernon overcooked a blown out corner at the exit to the woods, he span 180° and had to walk his bike back up the track, losing valuable time. A fast bottom section pulled back some seconds but it was a disappointing 11th place on the day.

Gee was third last down the hill and looked strong all the way – almost three seconds ahead a split one – he maintained this pace to cross the line at 2:08.13. Second qualifier Joe Smith was 2.7 seconds behind Gee for second place, and fastest qualifier Josh Bryceland couldn’t get into contention, finishing fourth at 2.14.39.

Gee commented: “A pretty intense weekend at Llangollen as usual – the crowd was awesome, the track was wild – stoked to take the win and stoked for Rach and Kade.”

Gee takes the Series lead from Slugger, and Kade maintains his first place in the ranks.

Posted by Silverline Tools at 11:12 No comments:

The fact we made it to Kiel at all was a minor miracle after Ed’s passport was stolen less than a week before leaving!

After a two days of frantic activity trying to sort a new one, it eventually arrived the day before we left for the ferry. Our coach Ian was less fortunate, and with his new passport yet to show, we set off without him.

After taking the early ferry from Dover, we drove throughout the day to northern Germany, where we were treated to a delicious home-cooked lasagne by our hosts, the Boheme family. Max Boheme is a crew member for one of the top German 49er teams and they looked after us unbelievably well during our stay at their home, which is a convenient ten minute walk to the club.

We rigged up in the Kiel rain and managed to get one day’s training in before the regatta started. Fortunately, Ben Rhodes was there coaching some of the development squad teams, so he adopted us for the week, once it was apparent that Ian wasn't going to get his passport in time. 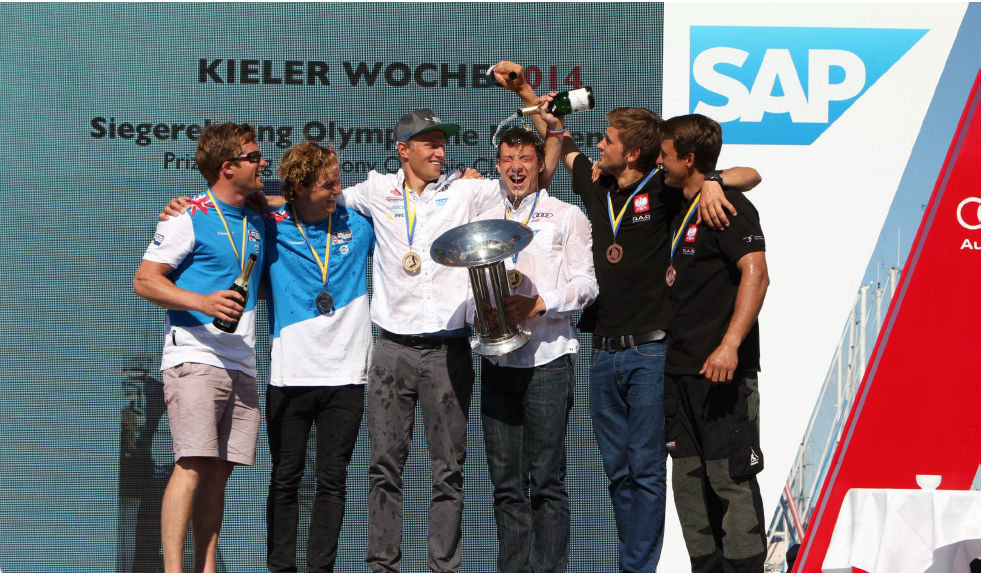 Day One was classic Kiel conditions - windy off the land and wet! We were second to start and were moved into a closer course with great flat water conditions. Despite the unpredictable wind we kept it nice and simple and were slightly disappointed with a 4.1,2, but this was enough to lead overnight.
Day Two turned out to be even windier, and we didn't make it out onto the water, so we made the most of the food stands and hospitality on site before they cancelled for the day.

The remainder of the week was run in a range of conditions from super light and random to breezy, offshore conditions. We didn't make life particularly easy for ourselves with some average starting, but battled through to sit second behind local favourites Erik and Tommy, heading into the three final day medal races. We went into the final day within striking distance of first, but had to be wary of the chasing pack who were about nine points behind. Unfortunately, the jury ruined our chances of taking the Gold in the first race by giving us a penalty for a non-existent port/starboard incident! We battled back to seventh in the race, but the points were now a lot closer between us and the chasing pack.

In the second race we stormed through the fleet to finish second and had a nice buffer going into the final race, where we managed to cruise home and comfortably take the Silver medal. This is our second medal in succession, after our Gold at Sail for Gold and we feel as if we are getting stronger as the season progresses.

We now have a few days off to prepare the boat, before making the trip further north to Helsinki for the Europeans. In the interim Ed will be competing in Sweden at Stop #2 of the Alpari World Match Race Tour before meeting up with Dave again in Finland.