Rachel takes National Championships for the 6th consecutive year and it's podiums for all this weekend with 3rd places for Kade and Luke.

The pits felt quiet with Gee resting his shoulder and repping the team at Trek World in Germany, Mille riding Norwegian National Champs and Muddy over in Australia. 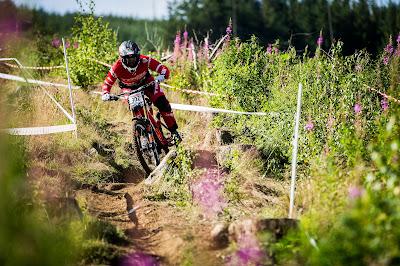 So it was all down to Luke in Youth, Kade in Juniors and Rachel in the senior women on a glorious afternoon in Rhyd y Felin.

Seeding went well despite a track that was "like a bog" at the top. Tight wooded sections, berms, roots and a stump gap that's caused at least five flats kept the challenge level high.

First up was Luke in the Youths. 2nd seed Luke said: "The track was pretty tacky, I had a couple of small mistakes but I'll know what to do for Finals".

Kade wasn't that stoked on his seeding run saying "it was just alright", but he was still the highest ranked first year junior - just over 3 seconds behind leader Matt Walker and 3rd overall.

By the time the Youth Men came on track for Finals the track was drying out well and feeling good. 3rd seed Jamie Edmondson put in a scorching run bettering the seeding times by almost 5 seconds. Luke couldn't quite match his pace but first seed Morgan Tyrell brought the goods to take the win in 3.09.92.

Luke said "the track was in better condition, I just took it too easy, way too average for a National Champs - it's horrible when you cross the line and you just want to go and do it again, pushing harder." 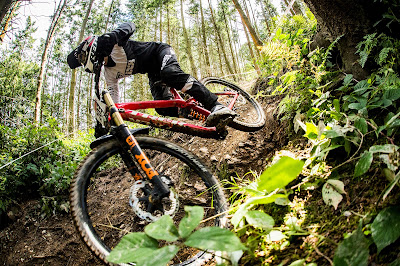 The Junior Men's Finals was lit. Kade had seeded 3rd and the team were super excited when he roared into the finish arena 3 seconds faster  than the top seen and with the fastest time of the day so far. He went into the hotseat 5 seconds clear of the field in 2.53.58

The excitement was short lived, on the next run Joe Breeden beat him by 0.5 seconds and the run after that Matt Walker stormed into the top spot; 2.51.45, 2 seconds up on Kade.

Kade was disappointed, though it was a fantastic showing from the first year Junior. He said: "The run was good apart from one turn, I gapped it off the road, overcooked it and came to a stop."

Rachel said: "That was mint! Everything that a British track should be with great conditions and loads of right turns. Tahnee pushes me so hard, I remember being here (2 years ago) and I won Elites and Tahnee won Juniors and now look! All the young girl riders should be inspired by that!"

The Men's race was won by Greg Williamson for the second year running.
Posted by Silverline Tools at 10:58 No comments:

Friday night in Lenzerheide saw some big thunderstorms which left the track pretty slippery for practice this morning, Kade had a small practice crash because of it, but it dried out pretty fast and all in all the riders welcomed the extra moisture which would help the track hold together (a little!) better as the day progressed – it still got pretty blown out and once again there were plenty of crashes as the added moisture made the track run “horribly fast!” 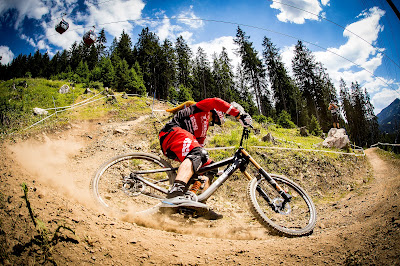 Kade was first up for the team. He’d been looking forward to racing and putting right his disappointing quals run but perhaps a little unnerved by his crash in the top section yesterday and this morning’s spill he didn’t quite hit the pace required. A crash in the bottom section just a few corners from the end of the course put paid to this weekend’s hopes – and knocked him back in the rankings from 3rd to 5th.
Kade said: “The run was chilled but the surface here is super slippery, especially in the last couple of turns – I didn’t quite go in to them right and it punished me and put me down! I wasn’t that keen on the track and was pretty frustrated all week. Onward and upwards to MSA”
Next up were the Women. Marine Cabirou was in the hotseat when the top 5 qualifiers came on track. Tahnee Seagrave went storming into hot seat in 3.32.62, bettering Cabirou by 1.5 secs but her stay in the top spot was fleeting as next rider Emilie Siegenthaler blazed ahead of her by a convincing 3.3 seconds with Tracy Hannah next on track. 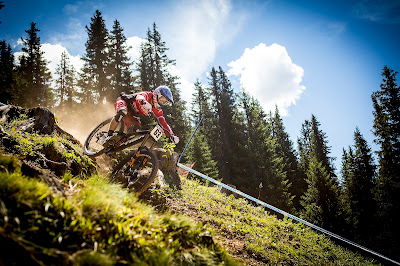 Tracy slotted into 2nd, 2.15 back from Emilie, would Myriam have what it takes? She did! 2.38 seconds clear and into the hotseat. Only Rachel was left on track but despite her brave show in quals she was still suffering after that shoulder dislocation – a brave attempt just 0.5 seconds off the win and into second place!
Rachel said: “ Thanks so much to the whole crew for getting me here , that was a team effort for sure,  getting my bike dialed, my body patched and my mind in a good place! What a mental track, horrible, so fast, its all a blur!”
By the time the Men came on track even the most manicured turns were full of holes.
Gee had promised the team he’d take it easy and concentrate on staying on his bike rather than risk further damage to his hip – even so he managed 3.06.25  - enough for a top 30 spot. Muddy bettered his quals run by over 4 seconds 3.07.61  - enough for 41st  but not at all where he wanted to be on this track.
Muddy said “ It’s a weird feeling to get my best finish of the season so far and be the most disappointed! I was confident today, I thought I’d be in for a good race but I bobbled a couple of turns in the first split and struggled to pull it back – goal was top 30, or 10 secs off the win  - 10.57 I got  - massive respect to Geeman – he got it!” 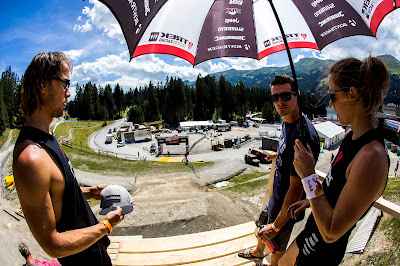 The Brits made a very strong showing with 15th qualifier Phil Atwill and 13th qualifier Laurie Greenland taking turns in the hot seat  until he was deposed by Danny Hart, so it was a Brit 1,2,3 until 3rd place qualifier Greg Minaar was on course. Ahead by 0.07 by split 1 he extended that lead to 0.7 at split 2 and 1.5 seconds at splits 3 and 4  - fastest by almost 2 seconds with just two riders left on course. Last week’s victor Troy Brosnan was in the red for the first 3 splits but not by much, by split 4 he was into the green by 0.09 and the crowd were wild but he couldn’t quite match Minaar’s sector 10 performance, crossing into second by 0.16.
Only Aaron Gwin remained on course. He accelerated all the way down the track, in the green all the way leading by 1.5 seconds by split 4 when he had a flat and his race ended in disaster!

Posted by Silverline Tools at 10:42 No comments: