Sunday dawned very wet at Llangollen this year. Practice was slippery but by the time qualification came around the sun had reappeared and looked set to stay for the day. The parched track dried out quickly and Rachel declared it: "Improved actually, pretty damn good." 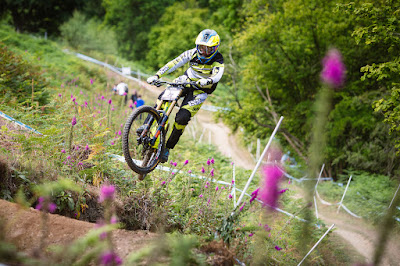 With Gee and Kade both out of action this weekend, Rachel was first up for the team. She had a clean and fast run qualifying 2.1 seconds ahead of Tahnee Seagrave with Manon Carpenter in 3rd, over 8 seconds back.

By the time the Men's Elite came on track it was blown out and altered from the morning's practice runs. Taylor was fast (5th through the speed trap) but had a messy run with his feet out more than once, he crossed the line in 2nd, eventually qualifying 16th in 2.10.664 (4.87 behind fastest qualifier, Sam Dale).

As Rachel headed up the hill for the Women's Finals she was a little anxious that she wouldn't better her qualification run. Her nerves weren't improved by a small delay when a pony wandered onto the track. None of the other women riders matched Rachel's qualification run, but Rachel did, she put in a trademark clean run and was up by 3.57 seconds at split one. She crossed the line in 2.17.141 to take her fourth consecutive National Championships by a very healthy 5.432 seconds. 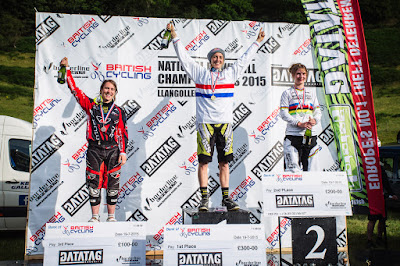 Rachel said: "I'm stoked! What an amazing weekend, the track was really good fun and i'm chuffed to win for the fourth time on the run. It's great that there are so many family and friends here today and I'm so proud to be representing Great Britain and getting to wear the GB sleeve for the rest of the season at World Cups."

Times in the Men's Elite race were very tight on this short, steep course. Second place qualifier Danny Hart took the win in 2.04.836 with Taylor in 14th place, just four seconds back.

Taylor said: "I'm happy enough I guess because I had a clean run, but to be honest it's at the lower end of where I'd be happy! I did have a good clean run but it just wasn't fast enough, it's hard work this Elite!"


Posted by Silverline Tools at 12:28 No comments:

Posted by Silverline Tools at 11:40 No comments:

Rachel Atherton makes it a hat-trick! 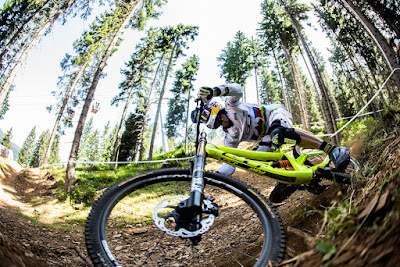 It was a hot and brutal weekend on a track that was super-fast, dusty and blown-out with braking bumps, big holes and debris the cause of multiple crashes and destruction. Both races were super-tense and action-packed.

The action started to heat up in the women's race when eight-place qualifier Katy Curd took the hot seat. In the very next run, Casey Brown toppled her by an awesome seven seconds, then Brown was deposed by next rider Morgane Charre. Emilie Siegenthaler was gutted when a flat and subsequent buckled wheel left her to walk her bike to the finish in front of a sympathetic home crowd. Then Tracey Hannah took to the track, bettering Charre by 2.5 seconds.

There were just three women left on track. Next down was World Champion Manon Carpenter who seemed to put an end to her run of bad luck today as she stormed across the line, 2.2 seconds up on Tracey.

Then Rachel was on course. She was up by 1.487 at split 1 and the team held their breath as she disappeared into the steep and technical middle section but she increased her lead over Manon to almost three seconds by split 2, crossing the line a full five seconds clear in 3.28.126. 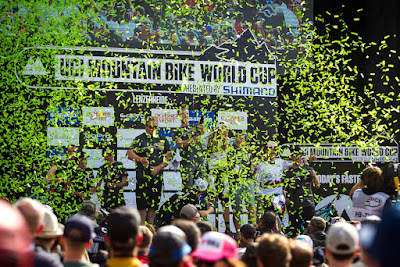 But the tension wasn't over yet. Rachel's time was still over a second slower than Emmeline Ragot's qualifying time: the French rider was on track looking very dangerous, two seconds up at split 1, she almost went OTB after one of the huge jumps on track but she managed to get back in control, only to clip a tree in the bottom section. She was nine seconds back at split 2 and crossed the line +9.8, enough for fifth.

Rachel said: "I'm stoked with the win today, I hadn't been enjoying the track and was feeling pretty nervous so I had to dig really deep for that Finals run. Huge respect to Ragot who has been pushing the limits and pushing me so hard, it's really bad luck that she crashed."

In the men's race, 19th qualifier Dean Lucas seemed to have taken up permanent residence in the hot seat with his time of 3.02.342. Gee had qualified in 10th place in 3.06.35, he was 1.2 seconds off Lucas at split 1, still in second place at split 2, 1.3 seconds off the pace but his legendary power regained him some ground in the sprint to the finish. It wasn't enough though, and he crossed the line in 3.02.889, into second place.

Samuel Blenkinsop and Bernard Kerr couldn't trouble the leaders today, then seventh-place qualifier Troy Brosnan was on course. Troy was seventh at split 1, he gained in the mid-section to go second at split 2, crossing the line ahead of Gee by a miniscule 0.027. 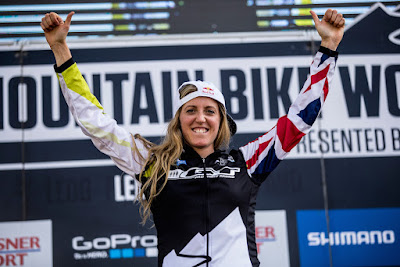 Sixth-place qualifier Greg Minaar put in a fantastic run to take the hot seat in 3.00.53 - would it be enough for his 18th World Cup victory?

Remi Thirion slotted in behind Gee, Josh Bryceland (riding with an injured hand) put in a fairly chilled run for an (eventual) 12th place, Connor Fearon went OTB and suddenly there were only Aaron Gwin and Loic Bruni left on the hill. Gwin couldn’t seem to pull it together for Finals, he finished eighth today but Bruni looked fast! Fourth at split 1 he’d moved into second by split 2 (+0.86) but seemed to slow at the last, crossing the line 0.96 down on Minaar, enough for second place.
Gee said: “Pretty annoyed to lose time with a mistake in the woods but happy to be back on the podium with such tight racing. The course was wild but the crowds were awesome!”

Team director Dan Brown said: “Set-up was crucial this weekend. With times as tight as they were the riders needed to feel super-confident in their bikes. The team did a great job getting the bikes and riders in the very best condition for the race. Winning the Team of the Day Award is awesome, I’m guessing there’ll be a few beers tonight!”

Posted by Silverline Tools at 13:54 No comments: