Rachel and Martin take the wins and Gee podiums with a solid 4th!

After a washout Saturday, Sunday dawned dry, cool and cloudy. With Qualifying postponed from Saturday because of the wild weather, the race day schedule was jam-packed with Practice, Qualifying and Finals runs.  By 6am Rachel and Martin (racing here in Juniors) were in the pits and warming up on the turbos.


By 6.45am and the start of practice it was pouring with rain again. Martin was first down and reported that the winds at the top were making riding really difficult , while the woods was a “battlefield” with a lot of mud and a lot of crashes.


Rachel was next; she had a good run down, made all the jumps and looked relaxed and confident, boding well for Qualifying.  Gee and Taylor also managed clean runs. The race was on! 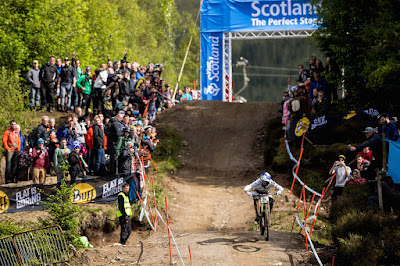 Martin was first up in qualifying, and he had another good run. Importantly he was clean through the woods, which scored him a qualifying time of 5.05.67 seconds. He took the hotseat from Jacob Dickson by 1.03 seconds and maintained that lead right through the ranks. Laurie Greenland was in 3rd (+ 2.35 back from Martin). There were a lot of crashes in evidence and a lot of punctures in the wet and loose conditions.

In the Women’s qualifying race, Emmeline Ragot was first to leave the start. She was safely down in 5.51.68 seconds.  Rachel was next on course but an off in the woods meant she was 25 seconds down at split 2, crossing the line 24.17 behind Ragot. Tracey Hannah was 4.5 seconds slower than Ragot  (an eventual 4th) then Manon Carpenter blasted through to take the hotseat in 5.38.37. Katy Curd completed the podium in 3rd, leaving Rachel in 5th overall with more in the tank for Finals.

The Junior Men’s race was a nail-biting affair from start to finish.  Bradley Swinbank was in the hot-seat when Frazer McCubbing smashed through into the lead by 8.083 (his time 5.11.83) Chris Hatton was in 3rd, then Neil Stewart came down into 2nd the leader board showing 1,2,3,4 for Great Britain. But not for long. Loris Revelli from Italy was the next man down - his time of 5.10 .028 took him into the lead by 1.8 seconds. Notably he’d made up 2 seconds in the bottom section. 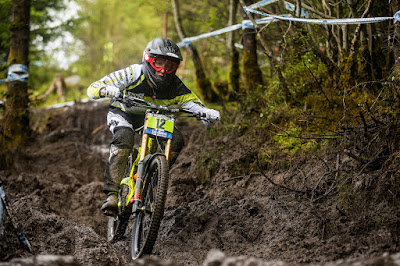 Revelli’s stay in the hot-seat was also destined to be a short one as Alex Marin Trillo roared down the hill in 5.05.48. Next run Laurie Greenland took the lead from him with 5.03.49 (1.925 ahead of the field).
Only Jacob Dickson and Martin were left on course, but Dickson crossed the line 17 seconds behind Greenland and so it was all down to Martin.

Unlike last year (Fort William 2014 was Martins first ever international downhill race, ridden just for fun) Martin was noticeably nervous and crashed within the first 30 seconds of his run, but in an amazing show of character Martin got back on his bike and battled on down the course with more than 5 seconds to make up for the win. He was 1.08.723, almost 3 seconds back (equivalent to 20th place,) at split 1 but his technical skills came to the fore through the mid section and he pulled back to +0.89 back (equivalent to 2nd place) by split 2. In the bottom section it’s all about power and Martin’s physical strength and Enduro training came together to make him an awesome 3 seconds on the motorway - he went in to the lead by 2.038, taking his second consecutive Fort William World Cup victory.

Martin said: “I am so stoked. It was much harder to win this year. I felt a bit more pressure but I did a good run, except that I had a small off at the top. Once I was down I knew that it was all or nothing so I got back on my bike and I absolutely threw myself into it – I’m so happy that it turned out good!” 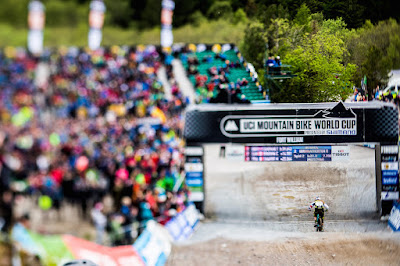 In the Women’s race Rachel’s fellow Brit, 23rd place qualifier Tahnee Seagrave, was in the hot-seat with a time of 5.39.64. Canadian Casey Brown went into 2nd 14.9 seconds back from Tahnee and then Rachel was on course. With the determination that has made her an overall World Cup series winner twice before, Rachel threw off the morning’s doubts to absolutely blast down the course! She was up at the first split by 2.15 seconds, extended that to 2.72 seconds by split 2 and then powered down the motorway section, sending all of the jumps to snatch the hotseat by a mighty 7.989 seconds.  The podium continued to change as Tracy Hannah made a few small mistakes and came down in 4th; Katy Curd came down in 3rd; Ragot went OTB but with her trademark toughness got back on and crossed the line in 3rd. Only Manon Carpenter was left on course. Manon was 3.3 seconds down at split 1, 3.7 seconds down at split 2, then she gave the motorway section all she had in an attempt to make up the time but  she took a massive tumble on the jumps. She scrambled back on and still managed to podium with 4th in 5.54.047.

Rachel said: “That was probably the hardest race of my life. The weather this weekend, track conditions and a crash in qualifying meant that I had to mentally dig really deep to earn the win today but as usual here I was inspired and lifted by the awesome crowd – I never want to disappoint them! 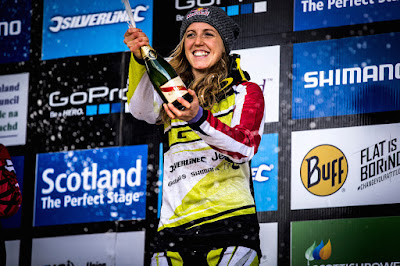 In the Men’s race Taylor was disappointed with 60th place, but there was a small consolation in his winning the Buff Whip-off competition!

When Gee came on course as the 8th qualifier Aaron Gwin was in the hot-seat with a time of 4.48.812. Marcelo Gutierrez was in second with 4.51.74.
Gee rode smoothly through the top section - just 0.15 down on Gwin by split 1 - but a couple of small mistakes in the woods cost him time and he was 2.5 seconds down by split 2.  He crossed the line in 3rd, 3.12 seconds behind Gwin.  7th qualifier Remi Thirion stalled in the woods, Sam Blenkinsop looked dangerous but finished 1.3 seconds short of Gee, then Greg Minaar was on course, up 0.5 at split 1 he strengthened his advantage by split 2 and crossed the line 1.119 seconds ahead of Gwin to take the hotseat.

Troy Brosnan, Mike Jones and Danny Hart couldn’t get into contention, then fastest qualifier Loic Bruni was on course. He was a tiny 0.01 seconds down at the first split but lost time in the woods, crossing the line in 7th to confirm Greg Minaar’s victory and make him the most awarded downhill mountain-biker ever.

Gee said: “I’m pretty happy with 4th today. I was still feeling a bit delicate from knocking myself out on Friday and I made a couple of mistakes in the woods. Congrats to Greg on another win!!”

Taylor said: “I’m disappointed with today’s result – Fort William is one of my favourite tracks but sometimes it just kicks my ass!”

Posted by Silverline Tools at 17:24