There were mixed emotions in the GT Factory Racing camp at the weekend. Massive celebrations for Rachel Atherton's recapture of her World Championship (amazingly it's her 3rd senior title and fourth overall - she won as a Junior in 2005). There was great excitement at Martin's 2nd place tinged with a touch of "what might have been" and of course crushing disappointment for Gee who went down hard after a pedal clip on a seemingly innocuous part of the course. 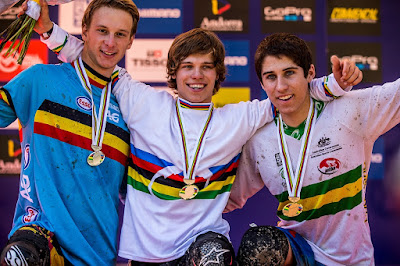 Sunday dawned bright and sunny, the track had been a brutal and treacherous beast as it changed character every run, it was drying out fast but there were plenty of slick patches to catch riders unaware as well as dried-in ruts and loads of holes.

First up was GT Factory Racing's young Belgian Enduro rider Martin Maes, who has already demonstrated his downhill prowess with a win at World Cup Round 2 Fort William. Martin had seeded 3rd on Friday. He kept his cool under the enormous pressure of Finals to put in a great run for 2nd place.

Martin said: "I'm stoked, I love to ride downhill with such brilliant team mates and the atmosphere here is so awesome - for me it's unreal. It's always a little difficult to come second but i'm still very happy! Thanks to GT and all of the team."

In the Women's race, Myriam Nicole, riding for local team Commencal/Riding Addiction was considered by many to be the biggest threat to Rachel for the title. Indeed it looked as though that might be the case when she went up by a huge 7 seconds at the first split, but a problem off camera left her with a twisted seat and put paid to her hopes of winning the title. 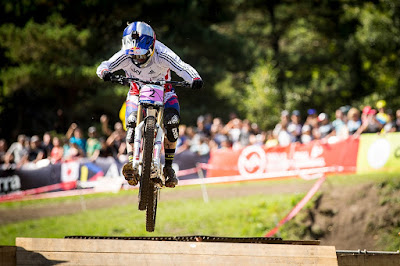 Tracey Hannah put in a very proficient run to take the hot seat and there were just three women left on the hill - all from Great Britain. First down was Tahnee Seagrave who risked it all on a fast run but came unstuck on a rut in the woods, she ended up off track with her front wheel over the top of a berm, crossing the line into 3rd.

Reigning Champion Manon Carpenter also came out of the gate red-hot, she was up by 4 seconds at split 1 and had extended that to 4.5 seconds by split 2. A slippery root looked dangerous for her lower down but she recovered, finally going into the lead by almost 7 seconds.

And then it was all down to Rachel. A massive lead of 19 seconds in timed training had done little to calm Rachel's nerves. She looked careful and in control all the way down, totally mastering the course, but her speed was deceptively fast. She was up by 3.5 seconds at split 1 and nearly 5 at split 2. As she had prophesied she lost time to Manon at the bottom of the course but her technical prowess had ensured she had plenty of time to do so. She kept the jumps squashed and low to maintain speed in a demonstration ride to cross the line a convincing 3.2 seconds clear of the field and to take her 4th World Championships and he second "World Cup Overall,World Champs season double".

Rachel said: "Wow I can't believe it! I'm totally stoked. I knew it would be hard, you have to hang on so tight! I so wanted this title back, being beaten by Manon last year really kicked my ass, I'm so happy. Having a Brit 1, 2 is awesome!" In the Men's race, Mike Jones took the hot seat by 2.64 seconds and for some time it looked like nobody would match his bottom section, Brook Macdonald was up at the 2nd split but crashed, Danny Hart was up at both splits but lost a lot of time at the bottom to cross in 2nd, then Marcelo Gutierrez bettered Danny to take 2nd (enough for an eventual 5th place on the podium). Greg Minaar attacked hard to smash Jones' time by more than 4 seconds with 5 riders left on the course including Gee. Gee has always said there is no point in taking it carefully at the Worlds. He was 3rd at the first split (down by 1.5 seconds) and then, on full gas to defend his title, he clipped a pedal and came down hard. Josh Bryceland went 2nd to Minaar but young French rider Loic Bruni smashed through split 1 to go 0.7 seconds up. He was 0.9 clear by split 2 and an awesome 2.3 seconds up as he crossed the line after the run of his life! Tony Brosnan and Aaron Gwin both crashed out leaving Loic a very happy winner.

Gee said: "Pretty gutted to be honest but that's how it goes with World Champs, it's all or nothing. It's all about Rach today - I'm stoked for her."

Posted by Silverline Tools at 16:46