Rachel takes her 14th consecutive World Cup win, Gee grabs 10th despite a storm and Kade is 5th in his first ever World Cup! 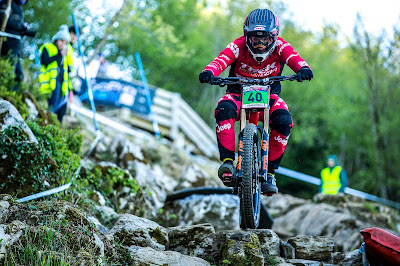 For the third time in three years Lourdes hosted the World Cup Finals on Sunday. The weather was sunny for Juniors and Women but the wind got pretty rowdy during the Women's Finals - by the time the men came on the track rain was looking very likely so most riders were heading up the hill with two sets of wheels, and the levels of uncertainty that's abound when practice has been in the dry and then the storm comes!

Young Kade Edwards was first up in his first ever World Cup Final. His run was nerve-wracking but he stayed on board slotting into 3rd place with just 3 riders left on track. The team were biting their nails as Finn Iles and Kaos Seagrave both went faster. Would faster qualifier Matt Walker deprive our boy of his top 5? Matt punctured, and the race was done.

Rachel loves the steep and brutal course at Lourdes but she came into the women's race extremely nervous. The track was pretty blown out but it had been drying out for the three days so times started to run faster. Fifth place qualifier Myriam Nicole was the first to go faster than Tahnee's fastest qualifying time of 3.28.98, crossing into the hotseat in 3.27. 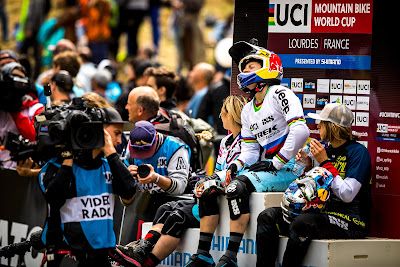 4th qualifier Tracy Hannah was very fast on the top jumps, she lost a little time on the technical sections but it was a strong run, 2.5 seconds up by split four, crossing 3.7 seconds up!

Brit Manon Carpenter couldn’t get into contention, she didn’t seem to make any mistakes but was a little more on the brakes crossing into 3rd place.

Then Rachel was on course. Could she do it?

Rach was clearly 110 % committed from the minute she left the start gate, carrying tremendous pace over the wall  to go 2.9 seconds  up by split 1. She had extended her lead to 3.5 seconds by split 2, and 3.8 by split 3. She lost a bit of time by split 4  (about 100th of a second) but she was starting to fade. With super-human effort she came into the finish with a time of 3.21.4 a whole 2.5 seconds clear of Tracy Hannah. 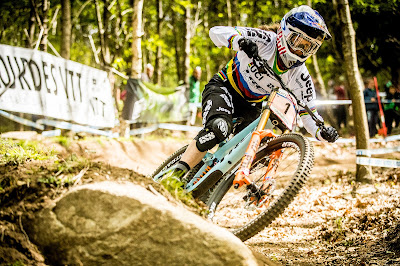 Only Tahnee Seagrave was left on course. Tahnee looked focused as she tackled the difficult top section, she lost a bit of speed in a corner to show 2.6 seconds back on Rachel by split 2 but there was still opportunity on the bottom section where she had been super-fast in qualifying. She pulled back to 1.94 seconds off the pace by split 3 but took a safer line than Rachel between split 3 and 4 losing more time. She was 3.07 back by split 4 and crossed into 3rd place. 2.7 back from Rachel and 0.15 back from Tracy.

Immediately after the race Rachel said: “I can’t believe it, the track is so rough and I’ve been watching Tahnee training so hard all winter, I’ve been literally sick with nerves, throwing up all morning, then smashing the Revels and the Haribos for some energy! I don’t know how much longer I can do this, the pressure is just mounting and mounting but at the end of the day I love racing!" 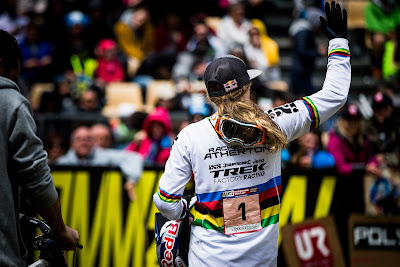 In the Men’s race 52nd qualifier Alexander Fayolle took an early lead. By the time 15th qualifier Brendan Fairclough came on track there was a weather warning in place with high winds and lashing rain ready to completely change the nature of the track.

Gee had qualified 12th and when he came on track the storm was in full swing and the start hut was barely visible through the rain. Despite being buffeted by the wind he was fully committed but nature was stronger. Gee was fourth fastest through split 2 but he was already 1.5 seconds back showing how tough conditions had got, and just how fast Fayolle must have been. By Split 3 he was 2.9 back, crossing into 8th.

Gee said: “That was as awful as it looked up there in the top section. We weren’t ready for it, I set off strong but all the way down the wind was stopping me, pushing me back.”

The final 15 riders rode an entirely different race. None of them could get close to contention with the previous riders, many of the top 10 were 30 seconds off the pace and Aaron Gwin and Danny Hart both went down hard as the track became impossible to ride. So the lower qualifiers took the glory today and Fayolle his first ever World Cup win.

Our Muddy didn’t have the greatest run, enough for and eventual 56th place.