Sunday dawned bright – to the massive relief of course creator Dan and all of the riders!


The initial field was slightly reduced by injuries, illness and riders making the call not to ride so Darren Berrecloth, Bruce Klein, Charlie Hatton, Gareth Brewin, Yoann Barelli, Sam Reynolds and Gee were all watching from the comfort of the Red Bull teepee. 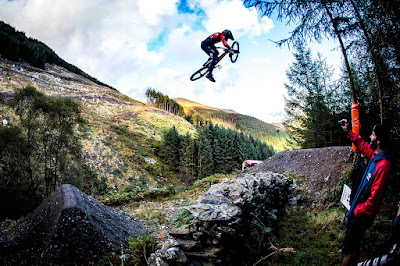 Gee said:“ I’m so gutted not to be able to race, if there was anyway that I could ride I’d do it – but I came down hard on my shoulder during practice yesterday and its going to need some time off the bike.”

So 13 riders lined up for the qualifying run, a bigger Finals field than ever before. Because the course is mega open at the top and the winds were increasingly strong the decision was taken  to start just before the cannon. This cuts out a very wet technical section and gives a long straight run to the cannon with a flag to help the riders judge the wind. –but it does mean that the riders are straight into one of the gnarliest jumps on the course.

Graeme Mudd was the first to go up for his qualifying run, he said: “That was pretty chilled, I just tried to be consistent, didn’t push too hard and did the jumps as fast as I could. “

2nd rider Oscar Harnstrom went over the bars when he landed on a root just after the step up but 3rd rider Bernard Kerr went into the hotseat in 2.29.66. Craig Evans put in a stylish ride to go into 2nd 2.33 – enough for an eventual 4th.

Then Dan was on course, Dan’s riding is always super smooth but even he was forced to dab a foot and pick his way through several sections crossing into 3rd.

Dan said “ I was scared at the top ,  everyone is scared. This is definitely the hardest year – the fact that we had to move the start proves that. 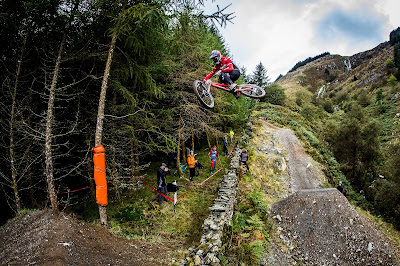 This year there would just be 10 qualifiers out of 13 riders so tension mounted as the last 4 riders came on track.

Al Bond crossed into 8th place, would it be enough? Brage Vestavik stalled on the rocks losing valuable time and crossed into 10th, but Kaos Seagrave bettered him by 9 seconds, Dave McMillan couldn’t do enough finishing a heartbreaking 11th and then final rider Alexander Fayolle roared into 3rd.

First off was Kaos Seagrave – he looked very comfortable and stylish all the way down to the road gap, the course had clearly dried out since the morning’s qualifications. The bottom section saw him make a few minor mistakes, he landed nose heavy over the Final jump but stayed on board for 2.45.40.

Al Bond was next, he rode smoothly until he made a big mistake just before the road gap. Unsettled, he pulled up in the next rocks to regain his composure before the road gap  - nevertheless he was less than 5 seconds back – 2.49.99 – enough for 9th today.

Laurie Greenland had the start of light rain on his run, he had a big stall but recovered well 2.36.26.
Then came the first of our Trek Factory Racing riders, Muddy started fast, 1.55 at the split, he looked relative smooth all the way – 2.36.73  and crossed into 2nd!

Our former team mate Taylor Vernon was next, he was caught out a little bit on the slippery ricks but still pushed on looking super quick and active on the bike, he went down in the technical section crossing the line 10 seconds back 2.45.96.

And then the creator of Hardline was on course. Dan was super smooth all the way, he was up at the split, flowing down the mountain to take the hotseat by 2 seconds, but he said himself as he crossed the line that in this fast company it wouldn’t be enough. 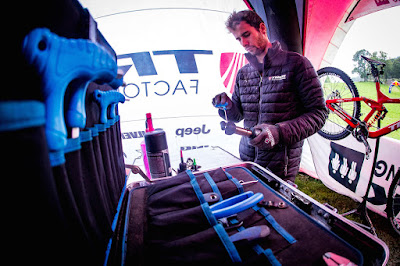 Alexandre Fayolle crashed out here in practice last year – he has been fearless this year but he lost the front on a slippery root and went down, his concentration broken he went down again, finishing the race just for the enjoyment of the crowd.

Then there were two – 2016 Hardline winner Bernard Kerr started big but soon got into trouble in the technical section, he became unseated and had to run after his bike.  He regained his composure, and  started to make amends, looking fast, but another mistake a couple of feet down before the road gap cost him some time eventually crossing into 2nd place.

After his run Bernard said: “ It was like ice up there, the difference from even half an hour ago was ridiculous.”

Would Dan be able to hold onto 3rd place for the second time in the history of the race? Adam Brayton lost a foot through the first  technical section, the crowd gasped as he made another mistake before the split but he was still 0.6 up at the split  - he went down just before the road gap. Craig Evans took the win.

Posted by Silverline Tools at 09:22