Mixed emotions for the Trek Factory Racing Downhill team this weekend with awesome Rachel taking her 8th consecutive World Cup win but Gee was one of several big names who just couldn’t find their flow this weekend, finishing 22nd. 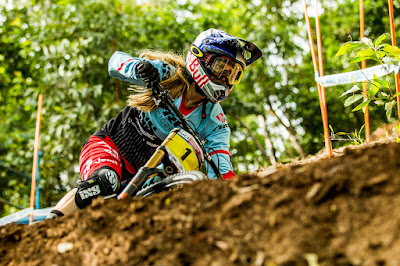 Taylor crashed out in practice; instead of starting his Finals race in his best-ever position he was hospitalised, being X-rayed for possible fractures to his arm and shoulder. He’s been given the all-clear and is back with the team - heal up soon, Tay!

The weather in Cairns has been uncertain all week, producing chaos in yesterday’s Qualification Race where every woman in the race crashed out. At one point Rachel tweeted that she was running down the hill after her bike!

But to the riders’ huge relief, Finals day dawned sunny and dry. The track was running fast, but even in the drier conditions the “rock garden”, a huge obstacle near the top of the course, was catching out a lot of riders, including fourth seed, Emilie Siegenthaler. But not so the 3rd qualifier, local rider Tracey Hannah who lives just 10 minutes from here and sailed through the rock garden in exemplary fashion to take the hot seat by 6 seconds. 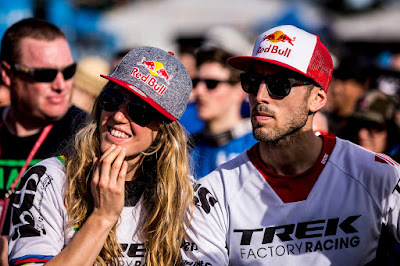 Only the UK’s Manon Carpenter and Rachel Atherton were left on course. Manon was slower into the rock garden and couldn’t quite make up the time on Tracey crossing the line into 2nd place.

Rachel won here in 2014 at the last Cairns World Cup. The last woman on course carried good speed through the rock garden then drove hard up the jumps to show an advantage of 2.8 seconds at split 1, extended to over 5 secs by split 2. Rachel is known for her physical power so her relentless pedal to the finish surprised no-one - she crossed the line over 7 seconds clear of the field.

After the race an exhausted Rachel said: “That final pedal was a killer! I heard the commentator say 7.5 seconds down and I was really disappointed, I’d felt like I had a good run, I panicked! I’m glad I got that wrong, and of course I’m ecstatic to win but at the same time there’s a part of me that’s gutted for Tracey – I know how emotional it is to win on your home turf and she rode a great race.”

Rachel extends her lead in the UCI Women’s Downhill standings with 490 points.  She is 135 points clear of fellow Brits Tahnee Seagrave (355 points) and Manon (350 points).

In the Men’s race, Taylor Vernon couldn’t start. He said: “I’m absolutely gutted, a stupid crash on my 2nd practice run of the day, but thankfully nothing’s broken so I’m hoping to be back on track for Fort William. I’m gonna have some bruises tonight!”

Australian (and eventual 5th place finisher) Josh Button was still in the hot seat when 10th qualifier Gee Atherton came on course. Last time Gee rode this course in 2014 he took the win so there was a lot of excitement in the crowd as he came on course. What could he do in these very different conditions? 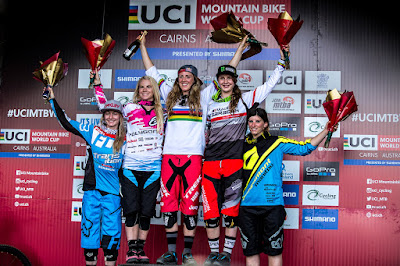 Gee started strongly. He looked very smooth and fast across the rock garden but was perhaps a bit wide as he came into the jumps, just 0.48 back from Button at the second split. But a small mistake in the roots of the central section put him 1.8 back by split 3. Gee is known as one fittest riders on the circuit so should have taken the bottom section of the course in his stride but today he couldn’t pull back any time and crossed the line in 14th – enough for an eventual 22nd.

No-one could get near Josh Button until the top 4 qualifiers, Loic Bruni, Aaron Gwin, Troy Brosnan and Mick Hannah, were on course. Bruni was first up. The Frenchman put in a scorching run, keeping it low over the jumps and going 4 seconds up by the 2nd split to take the hot seat by almost 4 seconds. Would it be enough for his first ever World Cup win?

Third qualifier Aaron Gwin crossed into 2nd, almost 3 seconds back then only the locals were left on course. Mick Hannah had a little mistake out of the gate but was delighted to sprint into 2nd. Could last man down Troy Brosnan catch Loic? Troy  stayed smooth, he was 0.02 back at split 3 and the crowd went crazy, now it was all about the sprint! He crossed the line just 0.49 back – Loic had his first win and it was 3 out of 5 Aussie for the Cairns top 5!

Gee said: “Massive congratulations to Loic, a storming run from him. A terrible day for me - just couldn’t put it together here and I’m gutted for Tay missing his Finals run. News is looking a bit more hopeful from that side though – heal up soon, bro!”