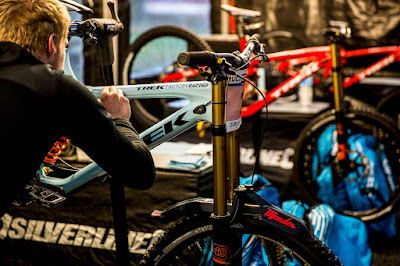 It was certainly a dramatic weekend at Lourdes for the start of the 2016 season with a crazy track, an even crazier French crowd and changeable weather contributing to a good few crashes. Rachel bought home the trophy on her first international race for Trek Bikes with Gee finishing 7th (laying the demons of his 2015 ride here to rest) and Taylor in 32nd. It was enough to earn the brand new Trek Factory Racing Team the first “Top team” award of the Series. We’ll be looking to hold on to that one…


Times were surprisingly wide-spaced on this fast track…

Friday’s practice was “nuts” and Saturday’s qualifiers almost equally wild as the slippery track managed to unseat an awful lot of the top riders. Gee took a tumble at the wall during practice but played it safe for a cool and clean run to qualify in 3rd, favourites Greg Minaar (qual. 32nd) and Aaron Gwin (qual. 10th) both crashed out at the top of the fast off-camber section. Local hero Loic Bruni smashed the qualifying field to go 5 seconds clear - would this be his first World Cup win? Trek Factory Racing’s Taylor Vernon played it safe and was well pleased with his 22nd.

In the Women’s qualifying race, it was a British 1, 2, 3 with Tahnee Seagrave taking the win by a 4.5 second margin, despite a crash! As in the Men’s race speculation rose high – would this be Tahnee’s first World Cup win as an Elite rider? Rachel qualified second, having “struggled to get into race mode resulting in a less than 100% run” and Manon Carpenter qualified in 3rd over 8 seconds back from Tahnee.

As the weathermen had predicted Finals day dawned sunny and dry. The track was drying out fast but there were still slippery patches to catch out the unsuspecting, especially during the Women’s race which was first up.

Australian Tracey Hannah was in the hot seat when British Manon Carpenter came on course. Manon kept good speed all the way, she looked smooth and kept it safe, applying the brakes over the finish jump to cross the line into the number 1 spot. 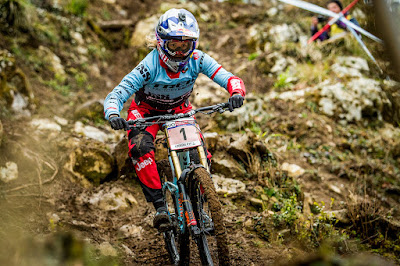 Second-place qualifier Rachel Atherton came on track wearing the rainbow stripes of the reigning World Champion. As soon as she was out of the gate it was obvious that she was riding faster than anyone else in the field. She found a little more speed over the wall but stayed in perfect control, going 6.6 seconds up by the first split. She looked very much in control, stretching her lead to the best part of 10 seconds by split 5. Rachel sent the final jump to cross the line over 10 seconds up. Only Tahnee Seagrave was left on course.

Maybe feeling the pressure a little, Tahnee lost a bit of speed in one of the first turns and was almost 5 seconds back on Rachel by split 2. She rode the bottom part of the course fairly steadily to come into second place.

So Rachel took her 27th World Cup, 10 years after her first World Cup victory in Brazil and it was an awesome 1, 2, 3 for Great Britain!

Rachel said: “The crowd here have been absolutely wild! It was gnarly how hard we had to push it. With the weather and the track changing so much I wasn’t sure how much I could push! I knew that Tahnee had smoked us in qualis, even with a crash so it was always going to be all or nothing, crash or win!

In the Men’s race, Taylor Vernon was a casualty of the unpredictable conditions. His suspension set-up proved too soft for the drying track but his eventual 32nd is his second best World Cup result to date so Team Director Dan Brown was not down-hearted. Taylor said: “I regret not upping my spring rate, it was way too soft. I’m disappointed not to match my quali result but I’ve learnt from it.” 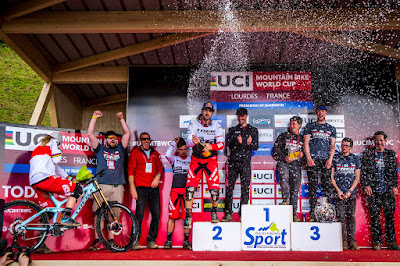 Aaron Gwin had qualified in 10th. He looked assured on his new bike from YT from the second he left the gate, 1.1 seconds up by the first split. He continued to stretch this advantage with an insanely fast mid-section leaving the remaining 9 riders to go flat out or go home.  Fourth-place qualifier Steve Smith got closest with a smoking run that saw him cross the line 2.4 seconds back, enough for 2nd place. Then Gee was on course. Uncharacteristically for him, he looked to be on the brakes as he came down the wall (scene of his practice crash) losing him a little time. After the race he said: “I was pleased enough with my run but not with 7th place. I took it a little too easy in places today which cost me.”

Second-placed qualifier Josh Bryceland edged Gee down as a spot as he crossed in 6th then only Loic Bruni was left on course. Loic was on fire, already a second up by split 1, making a mistake and dragging a foot but immediately getting back the time! He set a blistering pace and looked certain to take his first World Cup victory on home soil but a crash in the woods lost enough time to push him back into 14th place. Aaron Gwin was the winner.