Fort William is known as one of the toughest on the World Cup Circuit. It’s a track that Rachel loves and yet for years she had to settle for second place here. She had to wait until 2013 to take her first World Cup victory on home soil, but today she made it a hat-trick of Fort William wins, at the same time equaling the record for most consecutive World Cups, held since 2001 by Anne Caro Chausson. 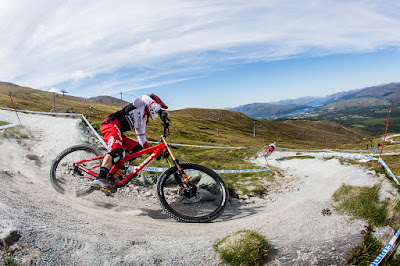 Gee and Taylor both fell foul of the Fort this weekend – Taylor failed to qualify by just 0.1 second but Gee took the qualifying win – only to crash out in spectacular style on his Finals run.

It was a blisteringly hot day at Nevis range when the Women racers came on course. Rachel had qualified in second place after a small crash at the entrance to  the woods. When she came on course for her Finals run Tracey Hannah was in the hot-seat with a time of  5.23.268.

Rachel rocketed out of the start gate. By the first split she was 4.41 seconds ahead of Tracey and by split 2 that lead had stretched to an amazing 12.83 seconds. There was a moment of trepidation for Rachel’s friends and fans as a small mistake caused her dab a foot but she held her bike up to edge up to 12.44 seconds clear by split  3, then 13.02 seconds at split 4, crossing the line in 5.11.219.

Only Manon Carpenter was left on course but she couldn’t match Rachel and was down 1.5 seconds by split 1. Through the woods the gap increased to 9.2 seconds, then disaster struck as a small crash put her off the bike. With true Welsh grit she climbed back onto the bike and pedalled for the finish line to take 3rd place . 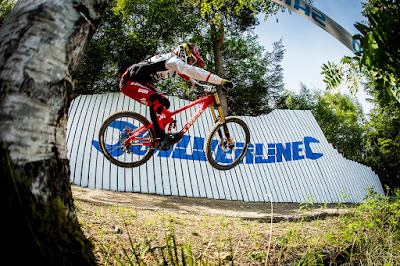 Gee was also racing for his Fort William World Cup hat trick today and the team were optimistic after his first place qualis run.

Greg Minaar has won more World Cups at Fort William than anybody else. He had flatted in qualifications but as a protected rider he raced today – 19th from poll position. He put in a storming run of 4.35.601, would it be enough?

Greg was still in the hotseat when the time came that Stevie Smith would have been on track. With Danny Hart  and Laurie Greenland who’d crossed in 2nd and 3rd he held up the Canadian flag as the stadium fell silent to honour Stevie.

Into the top 5. Adam Brayton looked sketchy the whole way down but crossed into 3rd  to the great delight of the crowd, Troy Brosnan crossed into 4th then Aaron Gwin blasted through into 2nd place. Surprise 2nd place qualifier Ed Masters’ luck ran out and he crashed hard twice, crossing the course tapes to get tangled in vegetation and end the race in 77th. 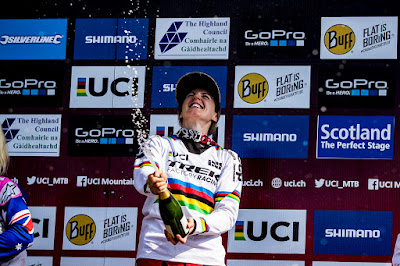 Only Gee was left on course. He came out of the start gate 100% committed and the crowd held their breath as he showed up 0.47 seconds on Gwin at split 1, he dabbed a foot on a corner but looked to be fully recovered until a slip put him down hard, ending his hopes for the weekend.

Gee said “ That was a stupid slip and it hurt! But I’m stoked to be back up to speed.”

Posted by Silverline Tools at 12:37