The King of Croft retains his crown

Saturday morning's practice sessions showed that the cars had good pace with the lap times improving as the morning went on. The afternoon's qualifying session saw double BTCC champion Colin Turkington dominating from early on and gradually improving his times throughout the 30 minute shoot out and showing an outstanding performance being the fastest out of the four Subaru Levorg GTs with a time of 1m 23.608s.

This was Colin's second consecutive British Touring Car Championship pole position start for Silverline Subaru BMR Racing, placing him in the hot seat for the opening race of the day for round 13 on Sunday. There was disappointment for Warren as he fought hard to be the highest placed of the Subaru Levorg GT's and ended up having a brief sideways off into the wall, however the car was repaired and he completed the remainder of the session. James was also left deflated after setting an impressive time of 41m 24.20s before having it disallowed for track limits. Jason set the 4th quickest time with Warren in 21st and James in 25th with a gap of just 1.4 seconds between the quartet.

The opening encounter on Sunday brought a historical 1-2 finish for Silverline Subaru BMR Racing, during a race that was plagued with incidents and three safety car periods. Starting from the pole position, Colin had a great start with 2nd place starter Daniel Lloyd attempting a move around the outside of the circuit into the first corner, however Lloyd turned in too early and across the nose of Colin that resulted in contact with the front of the Subaru which subsequently sent the Honda into the tyre wall. Thankfully Colin escaped without damage and retained his lead. The incident also caught up a number of other cars and brought a safety car to the proceedings. Jason had an equally impressive start to the race moving to the inside line and tucking up behind Colin and settling in 2nd place. 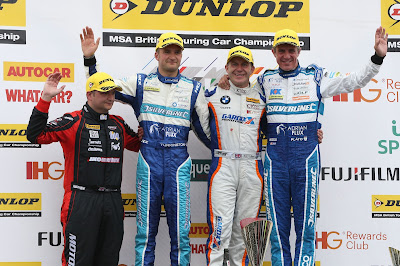 When racing resumed on lap 3, Colin held off Jason with both cars setting superb lap times, with the fastest of the race set by Colin on lap 5. By lap 8 there was a second safety car period after Mark Howard lost control into the first corner and went hard into the tyre wall. With Warren running in 18th and James in 23rd racing resumed on lap 10, but it was short lived after Kelvin Fletcher first tagged Dan Welch at the hairpin, that resulted in Fletcher spearing James off on the outside of the track ripping the wheel and suspension off the rear of his Levorg and putting an end to his race.

The third safety car period began on lap 13 to retrieve the stricken Mercedes of Aiden Moffatt. The safety car came in at the end of lap 16 so Colin did all he could to make a break from the now bunched up chasing pack and led home the Subarus for a 1-2 finish with a gap of 1.3 seconds to Jason. Warren came home in 16th place and just one place short of a point scoring position.

A delighted Colin collected the winner's trophy for the 38th time in his BTCC career and a second time for us at Silverline Subaru BMR Racing. An ecstatic Paul Tunnicliffe, Managing Director of Subaru UK, also took to the podium for the second time in 2016 to collect the winning manufacturer trophy for Subaru UK.

Following on from the superb results from the opening race, Colin would be lining up on Pole Position once again albeit with an extra 75kgs of success ballast on board, with Jason alongside him on the front row with 66kgs. Warren would start from 16th with James having plenty of work to do from 26th after the team did a stellar job repairing the rear of his Subaru Levorg GT.

As the lights went out it was Jason who got off to a flyer and shot into first place as Colin tucked in neatly behind him in 2nd. Further down the field the usual first corner mayhem struck again and once again James was forced off the circuit and into the gravel trap that resulted in yet another short safety car period for the next lap. 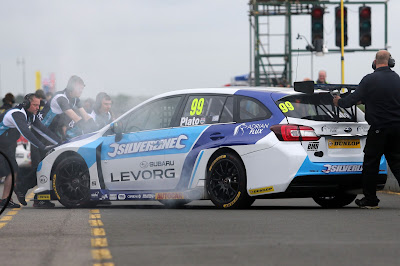 Jason set the fastest lap on the restart at the end of lap 3, and led by six tenths of a second before Colin retook the lead on Lap 5.  With the rear wheel drive BMW’s of Jack Goff and Rob Collard looming ever nearer and hot on our tails, the pressure was on and with our Silverline Subaru BMR Racing drivers having a ‘free to race, no team orders policy’ the battle continued for the lead until lap 8 when Jason went for a gap in an attempt to pass up the inside of Colin at Tower but the two cars made contact sending Colin sideways, which in turn slowed up Jason and Goff, allowing Collard through from fourth to take the lead forcing Jason back into 2nd and Colin into 3rd.  Warren was running in 19th until contact on lap 12 sent him into a spin at Hawthorn, however he managed to re-join the race before further contact from Kelvin Fletcher caused yet another spin on lap 15.  Jason doubled up with another podium in 2nd with Colin right behind him in 3rd. Warren finished the race in 26th place in his rather battle scarred Levorg.

The reverse grid draw selection was made by Team BMR guest and 23 times Isle of Man TT Champion John McGuinness. Number 8 was pulled out of the bag placing Sam Tordoff on pole Position. Colin would be the highest placed Subaru in 6th, with Jason in 7th. Warren would take his finishing position from race two placing him 26th with James at the back of the grid in 32nd after his non finish.

As the cars took to the grid the rain started to fall, and with it only being light the stewards hadn't called a wet race so it was up to the teams to choose which tyres to run, so a few took a big gamble
and ran on slick tyres. However, all four Subaru Levorg pilots elected for wets and it soon became apparent that was the right choice as the heavens opened early on in the race.

Once again all four made a great start, but unfortunately it was Warren this time that was forced wide and into the gravel trap on turn one bringing an early safety car.  Colin had made his way up to 4th, as Jason lost a few places and sat in 11th. James remained at the tail of the field having not made any advantage thus far.

When racing resumed on Lap 3 Colin found a way past the BMW of Goff around the outside moving up to 3rd.  With Jackson on slicks he and Moffatt made contact on lap 5 the safety car was deployed once more whilst Moffatts Mercedes was lifted to safety.   At the end of lap 9 Ash Sutton made a move in the MG making contact with Colin which then gave an advantage to the BMW of Collard and forcing Colin back into 5th place. 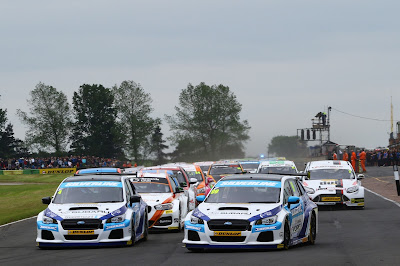 The safety car was deployed once again between lap 14  and lap 17 to retrieve the car of Hunter Abbott after contact with Jeff Smith bunching up the field once again.  The last two laps would be a sprint to the line with Colin finishing in a great point scoring position of 7th, Jason 10th and James 21st.   Rookie Sutton took the win, the first of his BTCC career.

The Dunlop MSA British Touring Car Championship now takes it annual summer break and reconvenes at the testing twists and turns of Norfolk’s Snetterton Circuit in six weeks’ time over the weekend of the 30th and 31st of July.

In the meantime Jason Plato will be attempting the Hill Climb at Goodwood this week with Colin Turkington’s’ car on display at the Subaru UK stand.

Warren Scott  – “Once again I am absolutely over the moon with the results for the team over the weekend, I think it really shows how far the guys have brought the Levorg’s on.  We’ve still got a lot to do in the second half of the season but we’re feeling very confident with the challenge that lies ahead.”

Jason Plato - “Another great weekend for us, we are making great progress with the Subaru Levorg. To be as competitive as we are at this early stage in the cars development is very exciting as we know there is still so much more performance to unlock.   Race one was another historic milestone for the team with our first one-two, it was a shame that Colin didn't see my move for the lead in race two as I'm sure we would have had produced another one-two.   The wet race three was a learning curve for me as it was my first wet race in a rear wheel drive touring car. After the first few laps I re-calibrated my driving style and was thereafter setting fastest laps.  I can't wait for Snetterton to come, I really believe the second half of the season will belong to us.  Huge thanks to everyone in the team, our success is a result of their huge efforts. Cheers boy’s n girls.”

Colin Turkington - “I'm really pleased to continue my race winning form at Croft and make further strides with the development of the Subaru Levorg.  We did the hard work on Saturday claiming another pole position and that helped set me up for a good race day. Wins don't come easy in the BTCC and I had to work really hard for this one, especially with three safety car periods.  Croft was a track that played to our strengths, but it was still an amazing job by the team to turn up and deliver the results that everyone expected.  Two podiums in any race weekend is a good return and overall I'm happy to walk away with a good haul of points and another victory."

James Cole - “I received a tweet on Sunday night from a Subaru fan, saying ‘If James didn’t have bad luck he’d have no luck at all…’ couldn’t have summed it up better myself.  It’s amazing how your weekend can be shaped by one decision.  From being seventh in qualifying with a minute to go to twenty fifth sixty seconds later because of a judicial decision is a tough pill to swallow.  My aim for Croft was to qualify solidly inside the top ten and get three solid results, which would have been a great step forward from Oulton Park.  The positives to take out of the weekend are we achieved our aim only to get it taken away.  With the championship being as competitive as it is, it was always a tough ask to carve through the field, even with a proven place.”

Posted by Silverline Tools at 11:40