Another win for Rach! 15th for Gee and 42nd for Taylor!

Saturdays Finals were to prove another scorcher in Lenzerheide this weekend. There’s been some rain overnight but the track had dried out nicely by the time the Women came on course. 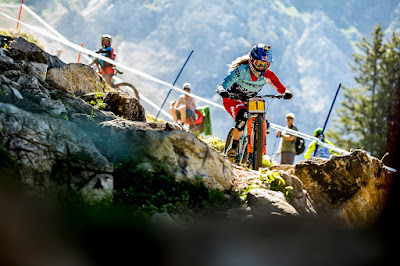 5th place qualifier Manon Carpenter went into the hotseat with 3.41.304, still 2 seconds off Rachel and Tahnee’s qualifying times it looked beatable, but next up Tracey Hannah crashed out. French rider Myriam Nicole on her comeback race put in a fast run to take he hotseat from Manon by over 2 seconds then only Rachel and Tahnee were left on course. Rachel hadn’t seemed to be able to find her flow and had been uncertain of some of her line choices this week but all that was put behind her as she posted fastest times at every split, crossing the line 6 seconds ahead of Pompon. But Tahnee was on super-form, would the young Brit (Rachel’s friend of longstanding) take her first World Cup win?

The Trek Factory Racing team held their breath, Tahnee was down at split 1 but only by 1 second, 0.7 by split 2. At split 3 the gap had widened to 2 seconds and it looked like she might not make up the time but Tahnee stepped on the gas to cross just 0.7 secs behind Rachel. The 11th consecutive win was in the bag and this season’s clean sweep continues.


After the race Rachel said “ That was close!! So nerve-wracking. Tahnee is pushing me so hard right now, awesome racing and it’s so cool to watch our different line choices and how much they impact on the split times.” 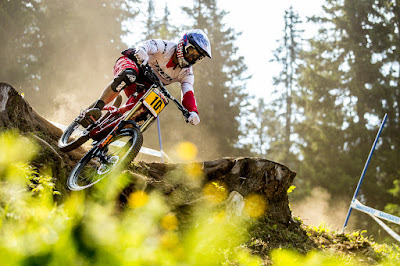 In the Men’s race 19 year old Taylor Vernon was first up. He put in a great run, crossing the line into 2nd, a fast time that would earn him 42nd place, his second best result this season.

Higher up the rankings it was 19th qualifier Aaron Gwin who really set the bar putting 5 seconds into Brendan Fairclough to take the hot-seat early on.

Gee had qualified in 14th. His run was all about alternative line choices as time and again he took a different way down. He was 1.5 down at split 2, putting him in line for 5th but he kept on pushing, fully committed. Unlike Gwin who’d looked on the edge of control all the way down Gee looked composed but was having to pedal out of the turns. He lost some more time to cross into 6th , enough for an eventual 15th place.

Into the top 3, Greg Minaar looked very fast but crossed 1.6 seconds back , George Brannigan never got in touch, he was 9th by split 1, enough fr an eventual 10th place then only Hart was on course. 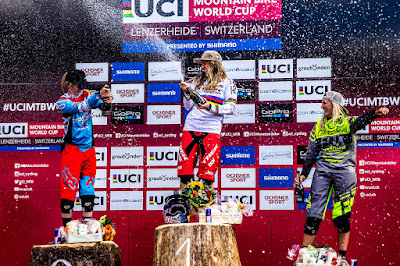 At split 1 he was down by a fraction, not the end of the world, but he didn’t really want that gap to get bigger… but it did. At split 2 he was further back in third, the same at split 3 where the gap was a full second, the crowd began to believe that Gwin was the winner but Danny roared through the last 30 seconds of the track like a man possessed to take the win by just 0.096.

Massive Congrats to Danny today – we’re all stoked for him!