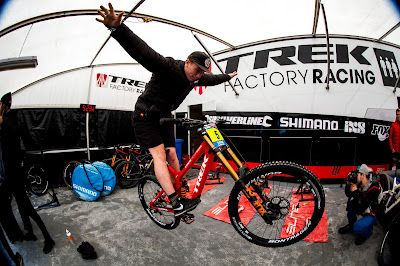 Fort William race day  - the big one! Of all the World Cup rounds it seems that here is where the heart is, the home crowds making every run a special occasion for the team!
Race day dawned sunny but lots of rain over night meant that the track was boggy with exposed roots waiting on every turn.

Rachel would be chasing her 15th consecutive World Cup win – 17th global victory if you include the World Champs but the atmosphere was relaxed with plenty of family and friends joining us in the pits.

It was a strange day for the Trek Factory Racing team with both Men’s Elite riders out of the running so all eyes were on Rachel and Kade.

But it was to get stranger still, Rachel crashed out in her practice run, she dropped off the end of the north-shore in the woods, hit a rut and slammed down on her left side dislocating her shoulder. She was taken off to the hospital for precautionary X-rays while the team waited anxiously.

But then the Men’s Juniors hit the track.

8th place qualifier Joe Breeden was in the hot seat with a time of 5.02.85 when Kade came on track. 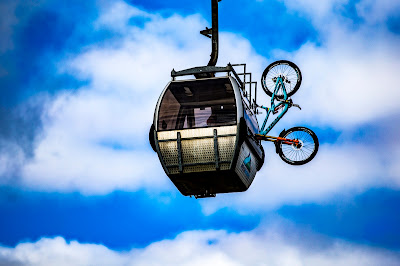 Kade was up a massive 2.6 seconds by split 1 but a big OTB in the woods meant that he lost the advantage – down 1.9 by split 2, still second quickest by 2.5 at split 3, he was closing the gap with a mature and composed remainder of his run, just 1.1 second down by split 4 he powered to the finish to take the hot seat just 0.1 second ahead of Joe Breeden.

Kade knew that it wouldn’t be enough, Finn Iles was next on course, 6.5 up by split 2,  7.5 by split 4, he crossed 7 seconds up on Kade to take the hot seat.  But on the very next run Matt Walker smashed his time by another 5 seconds. All eyes were on Sylvain Cougoureux. The French rider was 2 seconds down at split 1, then 8 seconds down at split 2, the Trek Factory Racing team held their breath – would he deprive Kade of his first ever World Cup podium? He did, making up some time to cross in 4.59 for third. 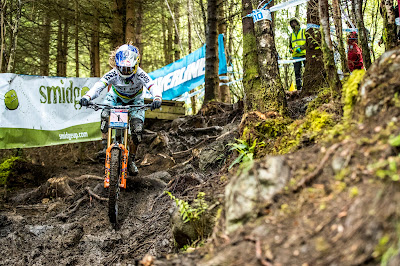 Kade said “I’ve been riding here for 5 years and today I rode the top section better than I’ve ever ridden it  (he was up 2.6 seconds) but then came the woods, I nailed the first section but there were massive holes everywhere, I knew that I’d have to dab so I safety unclipped then sure enough got stuck in a hole! My right shoulder struck a tree, the bike flipped and I got all tangled up in it. I reckon I lost 10 seconds easy, then I pushed on down the bottom, it was a good run after that but I’m pretty fed up to miss the podium.

Team Director Dan Brown said: “We’re pleased with the boy, it showed real character to get composure back after that off, its only a matter of time before the results come.”

The women’s race was looming and still no news from the hospital. Riders were already on track when Rachel appeared with her arm in a sling – she’ll have further tests tomorrow to confirm the dislocation and treatment plan. 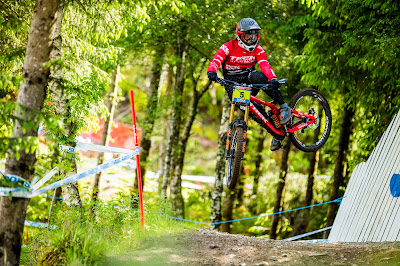 So Rach watched the top women with her teammates and family from the roof of the GoPro truck. It was a grueling race with crash after crash, fellow Brits Tahne Seagrave and Manon Carpenter both fell foul of the boggy woods, Tahnee came off her bike 3 times, rag dolling through the mud and Manon ran with her bike through a huge stretch of the wooded section – still enough for 4th on the day.

Polygon UR’s Tracey Hannah took the win in 5.39.298  hugely helped by staying on her bike all the way through the woods!  She scooted through, dabbing all the way to maintain enough speed for the win!

Rachel said: “ Obviously I’m gutted not to ride for the Fort William fans and to have picked up an injury this early in the season but its been a great winning streak and it had to end at some point, this is where it began and two years later this is where it ended. Huge congratulations to Tracy for a great ride – I’m glad I didn’t have to do it!”

The Men’s race was no less dramatic! 8th qualifier Remi Thirion was in the hot seat when Danny Hart crashed out in the woods, even Aaron Gwin was dabbing all the way through the wood section – it didn’t stop him taking the hot seat but he was soon deposed by Australian Jack Moir. Rain that had threatened the last half dozen riders was pretty hard by now, only Loris Vergier and Greg Minaar were left on track. Loris came off in the woods and suddenly it was all down to Greg Minaar, could he win at Fort William yet again and make this 20 World Cup wins? He was 0.3 up by split 1, 2.99 by split 2 and the crowd were going totally crazy. Up 3.38 by split 3, 2.8 by split 4, Greg absolutely smashed it, crossing the line in 4.40.344 to be buried in a huge pile of his team-mates rushing to congratulate him.

Posted by Silverline Tools at 16:54