Rachel Atherton Wins Every Round of the UCI MTB Downhill Series!

Rachel Atherton has won the 7th round in the UCI MTB World Cup Round 7 in Andorra, simultaneously securing her 13th consecutive World Cup victory, the Series Overall title and a clean sweep of 2016 World Cup victories – a feat never before achieved in the sport!

Youngest rider Taylor Vernon showed true grit when he took the early lead, despite riding with a broken nose and a LOT of bruising after a horrific looking practice crash and Gee only decided to race at last minute after re-injuring the shoulder that he’d struggled with since Fort William. He cruised down the hill for a few final points in the Series but he was never going to be in serious contention today.

The women were up first. As Rachel took to the track she had already been confirmed winner of the 2016 World Cup Series with 12 consecutive World Cup wins under her belt – 6 out of 6 rounds so far in the 2016 Series. 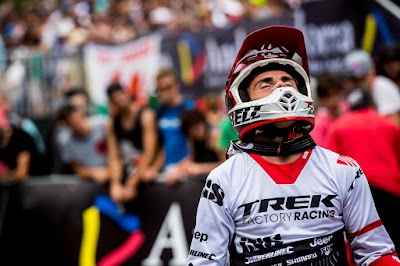 In the run up to the race Rachel had been suffering from a bad back and had qualified in 3rd place. The champion rider had talked about perhaps easing up a little to preserve her back for next week’s World Champs but there were no signs of her doing anything of the sort as she tore out of the start gate. Could she make it lucky 13 wins in a row and a clean sweep of World Cup wins?

When Rachel came on track Manon Carpenter was in the lead with Tahnee Seagrave sitting in 2nd, a brave run despite a punishing fall in yesterday’s qualis. From the first split it was clear that Rachel just couldn’t hold back, whatever her stated intention! She was almost 4 seconds up on Carpenter by split 1 and continued to pull away, tearing into the hot-seat a staggering 8.8 seconds ahead , her time 4:52.783

Only Tracey Hannah and local star Myriam Nicole were left on the hill. Tracey rode a good race to cross into 2nd in  4:59.351. Then all eyes were on Pompon, she was 2nd by 3 seconds at the first split but had dropped back to 4 seconds gap at the second and  the gap had widened to almost 7 seconds by the final check. It was clear that she wasn’t going to match Rachel, she crossed into 3rd, about 1.5 seconds behind Tracey.

Rachel had won the day, taken a clean sweep of the Series and yet another record! 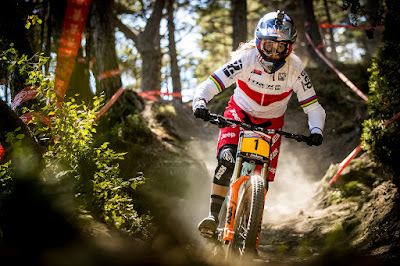 After she’d recovered a little bit Rachel said: "I cannot believe it! I totally thought it would never happen, I thought for sure Tracey or Pompon would beat me after qualis was so close” I just made some massive changes to my suspension, the opposite of what I had been doing all week, and I tried really hard making my bike stick to the ground and really using the steepness of the track to help me instead of being scared of it!! I am beyond over the moon and to have the perfect season is a testament to the hard work that goes in from the whole team and of how the team have kept my head together when I've been too nervous!"

In the Men’s race Taylor had qualified 73rd, he put in a storming run of 4.26.025 to take the hotseat and stayed there for a significant time! Enough for an eventual 26th, his Best World Cup place ever, and 50th in the overall rankings.

From the start it was clear that Gee wasn’t going to be in the race, his careful run ended with a puncture in the lower section, enough for 60th but crushingly it left him just 3 points short of a top ten ranking in the overall standings for the first time since 2005 when he was just 20 years old. 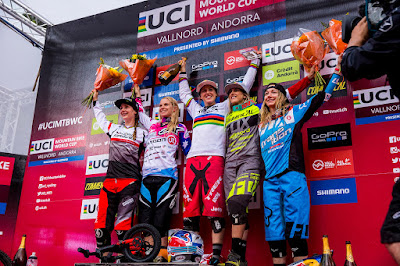 Just before 32nd place qualifier Adam Brayton came on track the long expected storms broke over Vallnord, conditions up top soon got super wet and slippery but the woods stayed dry, complicating tyre choice. Carnage ensued! Josh Bryceland had a big off in the woods, Brook Macdonald flatted, Mick Hannah made a mistake up top and Bernard  Kerr stalled in the bottom sector. Into the top ten and Minnaar made experience count to go into the hot seat in 4:16.409. He didn’t stay there long as seventh place qualifier, Redcar’s own Danny Hart blasted through in 4:13.611.

Luca Shaw and Ferran Jorba Prats  crashed out, Pierron couldn't get into contention  and then there were only three left on the hill.  Local rider Remi Thirion was disappointed to be twelve seconds off the pace, Aaron Gwin only had to score a top 80 to take the overall today, he took it easy to post 55th and clinch the series title, Troy Brosnan had a spill but recovered to cross into 20th leaving Danny Hart the winner of his third consecutive World Cup by a convincing 2.7 seconds.

In the Overall Team Standings Trek Factory Racing DH missed out to MS Mondraker by one point.

Posted by Silverline Tools at 08:43