Subaru storm through the field at Rockingham

It was a weekend of highs and lows for Silverline Subaru BMR Racing at Rockingham over the weekend for rounds 22, 23 and 24 of the Dunlop MSA British Touring Car Championship.

Qualifying on Saturday afternoon was red flagged half way through the session when the weather made a turn for the worse plunging the circuit into the darkness of thunder, lightning and torrential rain.  Jason Plato was one of the many drivers that endured an off track excursion before the session was delayed for ten minutes allowing the rain to ease and the track to be assessed before the second half of the session recommenced.

As the track improved with every lap Jason brought his car home in 4th albeit with damage after another incident. Colin set the 5th quickest time making it two Subaru’s in the top five with James and Warren qualifying in 17th and 18th determining their grid position for the first of Sunday’s three races.  Pole Position went to Gordon Shedden in the Honda.

With the weather having greatly improved for race day on Sunday, the crowds flocked to the Northamptonshire circuit to witness the drivers battle it out for points as the championship draws ever closer to the end of 2016 season.

Race One was a fantastic start to the day with both Jason and Colin making up a place on the opening lap resulting in the first podium of the weekend for Jason in third position and Colin just behind him in 4th, that also secured us the Manufacturer Trophy for Subaru.  Both James and Warren received contact on the opening lap forcing them both down the order.  James finished the race in 22nd with Warren making a great fight back through the field from 30th to finish in a very respectable 19th.  Pole sitter Shedden took the win.

Race Two wasn’t such a great affair as both Jason and Warren suffered damage on the opening lap forcing Jason into retirement and Warren two laps down in 23rd.  Colin also tumbled down the order after getting caught up in the second corner mayhem and then subsequently had a spin which he impressively controlled avoiding the concrete wall.  He recovered to finish the race in the final point scoring position of 15th.  James excelled making up ten places and was the lead Silverline Subaru BMR Racing driver finishing in 12th and adding to the impressive tally of manufacturer points for Subaru.  When the flag fell it was BMW’s Sam Tordoff who crossed the line for the win. 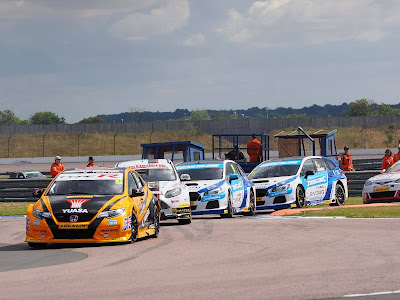 There was further retirement for Warren in Race Three after an electrical issue with one of the engine control boxes failing.  James brought his car home in 18th whilst teammate Jason had a superb race through from the back of the grid and up to 10th. Colin once again showed off his outstanding driving skills making his way up to the 3rd and final spot on the podium, his 8th of the season, from 15th on the grid.  Aron Smith took victory in the BKR Volkswagen making it an incredible twelfth driver to stand on the top step of the podium during 2016.

All in all a mixed bag for the team but some very crucial points scored.  Colin is now 48 points off the leader Sam Tordoff with Jason 11 points adrift of Colin.

The championship now heads into its final two events the first being at Silverstone in three weeks’ time on the 17th and 18th September for the penultimate rounds.

Colin Turkington said “I come away from Rockingham pleased with my performance but frustrated at what could have been.  My aim before the weekend was to close the points gap to the leaders but unfortunately I was unable to do it.  That said I didn't lose any ground and I'm still determined to give it my best shot over the final two meetings.

“The car was fast in all conditions and even in the most extreme conditions in qualifying we were seriously competitive.  Banking a solid fourth place finish was a good start to the day, but unfortunately things unravelled in race two with two separate incidents, one of which saw me spearing backwards towards the wall at over 200kph!

“Race three was one of the best I can remember in some time as I moved from a lowly fifteenth grid position onto the podium.  Once again the Subaru was on rails and I was able to slice my way through the field and demonstrate just how good our package is at the moment.  I've got to start the first race at Silverstone from the back of the grid due to picking up two penalties at Rockingham for minor rule infringements, but I'm never one to shy away from a challenge.”

Jason Plato said “To summarise the weekend we were a bit unlucky in race one and then also for race two as in hindsight I could have won that.  The Race two crash at turn two affected my weekend.
“I was pleased with race three and managed to get up the order, although I didn’t officially overtake anyone they all crashed out, I found it difficult to overtake due to the fact that we were too slow in straight line.
“Rock on Silverstone!”

“Qualifying was without question the most challenging conditions I've ever driven a race car in. Driving around an oval in a thunder storm certainly gets the blood pumping!

“Race One pretty much ended before it started. Sadly first lap damage due to idiotic drivers is now becoming the norm in BTCC. I sound like a broken record but finishing the first lap of Race One with the rear wheels pointing in different directions isn't what you would hope for.

“Race Two thankfully was a lot better and moving up through the field was fun. The cars pace in clear air was fantastic and having better lap times on the hard tyres than many of the cars in the top ten was very encouraging.

“In Race Three I was again on the receiving end of constant contact before eventually getting spun out.

“What I take away from the weekend is, a bad Saturday is very hard to recover from. In Races two and three the pace of my Subaru was more than good enough to stay comfortably inside the top ten. I just need to focus on qualifying inside that top ten where there is respect between the drivers and driving standards are rarely an issue.

“It goes without saying the wonderful job Team BMR do to deliver such a great car.  Any frustration I have is as much for them as it is for me. "


Photos by MJP Media
Posted by Silverline Tools at 15:48