Rachel takes the World Championships 2016, Val di Sole, and it’s a great showing for the Brits with 1, 2 in the Mens.

It’s the perfect end to the perfect season and her fifth World Championship (4th as an Elite)! In the Men’s Elite our “adopted” rider Trek’s Charlie Harrison put in a great run for 14th!!

In a break from World Cup traditions World Champs doesn’t feature a qualifying round so riders take to the hill in reverse order of their UCI Ranking. 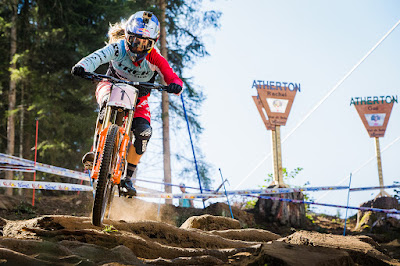 In timed training Rach scored first place in 4.20. 191 despite a mistake in the top section but Tracey Hannah  (2nd in the rankings) was just 0.59 seconds behind , French rider Myriam Nicole was in 3rd (9.7 seconds back with Brits Manon Carpenter and Tahnee Seagrave 4th and 5th respectively, 10 and 12 seconds back.

The weather has been dry in the run up to todays Finals and  the track was rougher and more blown out than the riders had ever seen it before. The track is ridiculous steep, technical and even though there’s barely any pedaling it’s a massive test of fitness.

First up of the top 5 was Pompon, starting uncharacteristically early after a broken collar bone this season depressed her expected place in the World Cup rankings, she was up 12.6 seconds at the first split, which increased to 23 seconds up by split 2 , she crossed in 4.23.301 ( 3 seconds outside Rach’s time yesterday and 25.7 seconds clear of the field.) 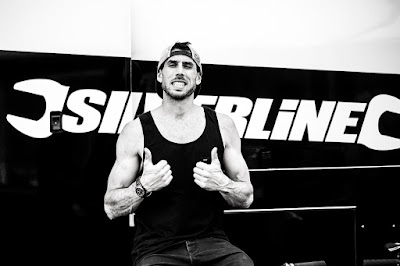 With 4 riders left on track Tahnee Seagrave was straight on the gas, she made it through the first turns with a lot of speed but she was 13.16 back by split 1, 20 secs down by split 2,  back 22 seconds 4.45
Then Tracey Hannah was on course, she in touch 4.11 back at split 1 that had stretched to 7 by split 2, crossing into 2nd .

Manon Carpenter went down hard in the first turn when her front wheel was grabbed by the dust.

Rachel must have seen her GB team-mate go down but she didn’t look like she was taking it any steadier just 0.637 ahead at the first split 3.154 at the second, there was a heart stopping moment as she almost stalled in the dust but she held it and crossed the line 3 seconds clear of the field.

Rach said “I cant believe it, I felt sure that Tracey would go faster she’s been riding so well in the dust, I’m still nervous talking to Peaty and he’s up at the top ready and waiting to sweep, and I was thinking oh no – he’ll be sweeping me!!  The track was so mad, like a controlled fall all the way. But this feeling now it’s the greatest, I want everyone to experience it. Thanks to everybody who’d helped me and supported me – I couldn’t have done  it without you all."

In the Men’s race  the team and fans were gutted that Gee’s injured shoulder prevented him from racing but there was plenty to get excited about as our former team-mate and Atherton Academy graduate Belgian’s Martin Maes took early lead, and later our adopted shredder Trek’ s Charlie Harrison also went into the hotseat, he had a great result – 14th place overall and 3rd fastest through the speed trap. 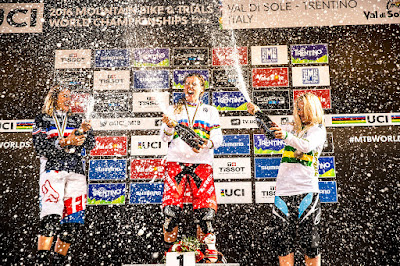 GB’s Laurie Greenland smashed into the lead by a massive 8.5 seconds from Jack Moir, then his team –mate Bernard Kerr (Gee’s last minute replacement) put in a great run to slot into 2nd, Greg Williamson crossed into 3rd so with 12 riders left on track it was an all GB podium – until Frances’ Florent Payet crossed into 2nd!

Into the top 10 and JGB’s Josh Bryceland, Marcelo Villegas Guttierez, Connor Fearon and Remy Thirion couldn’t get into contention, then Defending Champion Loic Bruni had a rear flat, it didn’t stop him tearing down the track but he couldn’t challenge the top boys. .
Even Greg Minnaar looked to be experiencing difficulties, he pulled back some time on the lower section, enough for an eventual 7th.

Danny Hart was on full gas straight out of the start-gate. He was up at the first split, and stretched this to around 2.5 seconds, crossing into first by 2.927.

Only Troy Brosnan and Aaron Gwin were left on course. Troy was back at the first split and continued to lose pace, enough for 4th today

Then Gwin was  in the start-gate and the crowd held their breath for the man who has won more on this course than any other. But a slight mistake resulted in his rear wheel exploding, he came off his bike and DNF. So it was more celebrations in the British camp with a 1, 2 for Hart and Greenland with Florent Payet taking the bronze.